I love Taco Bell. I think that Chrissy Teigen and I are food twins, because we both have a high appreciation for foods like cacio e pepe, but also a strong admiration and love for Taco Bell. There’s just something about it–the convenience store chip-based items, the flavorful “meats,” the zesty sauces. The crazy college pothead combinations that my freshman year stoner floor mate probably thought of, and the culinary crazieness, those aspects churn out culinary innovation and creativity….and all for less than approximately $3 an item.

There are of course critics that say that Taco Bell isn’t real food, and that it isn’t “authentic” Mexican food, or that it’s “gross.” And to them, I say this–what is real food? What constitutes calling a food item “not real,” if it is edible and enjoyed by many (and please don’t try to argue with me on this point, Taco Bell is adored by millions, and has a crazy strong social media following)? What gives an individual a right to say that a food item is not real?

Also, if you think it’s gross, don’t eat it. I think that posole is gross, and you don’t see me running around commenting on it! (Except just now, to prove a point).

ANYWAYS, I love Taco Bell. When I was younger, sometimes (okay..maybe not sometimes, but pretty often) my dad would take me to Taco Bell, and I would always get the same thing. I would get two spicy shredded chicken crunhcy tacos with no tomato or lettuce (I was a picky eater), and fiesta potatoes. Always.

And then those assholes discontinued the spicy shredded chicken. Until recently, actually! Obviously, I prefer the chicken to the beef for nostalgic reasons…but also also because it’s sooo good!

Recently, my favorite thing to get at Taco Bell is this–I wish I could say that I’m a genius and the idea came to me magically, but this genius on Twitter thought of it. And Buzzfeed posted one of their listicles, and I saw it!

Taco Bell Hack – Buy 2 mini chicken quesadillas, and 1 spicy tostado. Break tostada in half and put each half into quesadillas. Your welcome 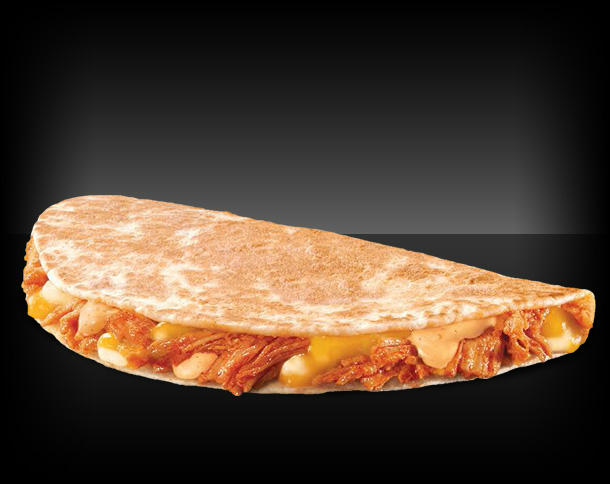 It’s so easy! I order a spicy tostada without tomato, and two shredded chicken mini quesadillas, and then I follow Chris Thaung’s genius instructions. Add diablo sauce (my favorite one! I always secretly have some in my purse) as needed, and then go smash your Taco Bell deliciousness.

My other favorites at Taco Bell:

My other favorites at Taco Bell that they need to bring back:

ALSO, in case anyone from Taco Bell is reading- if you made the Spicy Tostada with a Doritos® Locos Tostada, it would be bomb.

And also, bring back the spicy shredded chicken crunchy tacos.

One thought on “No, Really, I Love Taco Bell”