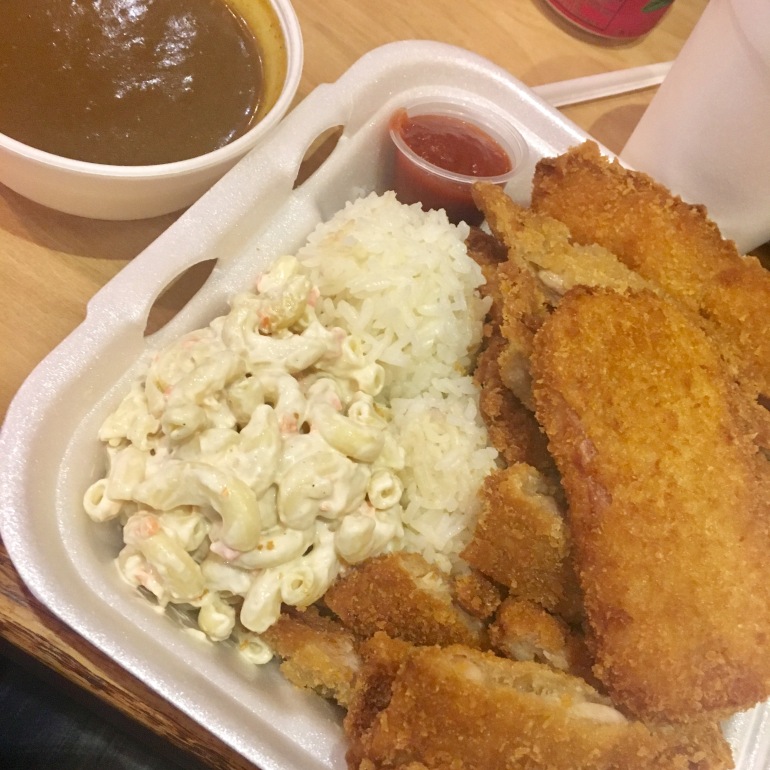 I’ve mentioned before that I am a HUGE foodie.

I love food. Food loves me. Restaurants that aren’t the best that I review on Yelp…they do not love me.

A lot of people ask me what food I’m Instagramming or Snapchatting, and I’m always more than happy to oblige! Usually if I blog about a food item, I am good about listing the restaurant and place (unless it is a place VERY close to where I live or so specific to the location of my apartment that I find it a bit of a safety hazard to disclose the location). So, I was thinking about it, and I thought I’d blog today about a very special food place that remains near and dear in my heart, and Ashley’s.

Especially since people are always asking where and what it is, whenever I Snapchat it!

One day, back when Ashley and I worked in the same building, the two of us were casually hanging out when one of her coworkers said, “I have to hurry and uber to Aloha Eats, it’s just so good!”

Immediately, my Yelp-loving, foodie senses went off, and before you could say Mahalo I had already typed Aloha Eats into my phone, scanned their menu, and knew what I wanted to try. Ashley and I both scanned the menus, and made a mental note that we were going to go, as soon as humanly possible.

I have a good amount of experience in Hawaiian cuisine, and I have to thank my friend Cam for it. Back when I first met him, he would always be frying up Spam and runny eggs, and serving it with rice. He would put Furikake on popcorn, and yearn for Spam musubi, day and night.

I also dated a guy who was from Hawaii, and he always told me about macaroni salad, saimin, and katsu.

I was familiar with Portuguese sausage, as it reminded me of Vietnamese lap xuong, and I was already in love with Fried Spam and rice. It was a long-term love affair that began at my grandmother’s house when I was a little girl.

But the rest? Especially all together in a plate lunch? That was uncharted territory, and Ashley was willing to come try it out with me that day! She’s very particular about food, and I knew she wouldn’t touch the Spam with a ten foot pole, but I knew she’d love the Katsu.

We Ubered there, and then arrived in the quaint little restaurant among the hustle and bustle of Lincoln Park. I was so familiar with the area, I had been to the Molly’s, to Del Seoul, to Sultan’s Market…how had I never spotted Aloha Eats?!

We both ordered the double chicken combo, and we both were in LOVE.

Chicken Katsu – $9.20
Boneless and skinless chicken filet breaded with premium Japanese bread crumbs, fried, and chopped into smaller pieces.  Served with our home-made sweet and tangy Katsu Sauce (or with Brown Gravy instead on request; white meat is $9.65)

I of course, had some fried Spam on the side.

We both were obsessed, as not even a day later the two of us once again Ubered to Aloha Eats, this time in the rain. We slowly, but surely took our entire friend group to Aloha Eats, where they too fell in love with the delicious food.

I’ve never had anything bad from there, and I am fondly in love with their Chicken Katsu, and mac salad. There was a brief time when we were so addicted to Aloha Eats that I attempted to make their macaroni salad at my apartment, and very much failed.

Aloha Eats is permanently in my Uber favorites, and last summer when they closed for a weekend I was so bummed, and when Ashley asked me to go and I told them they were closed for a family event, she didn’t even question how I knew that information (thanks Twitter!)

When Max told me that he loved Aloha Eats, it was one of the first things about him that impressed me about him. Obviously because A, he knew what Aloha Eats was, and B, he was smart enough to be as much as a fan as we were.

Ashley and I usually get our usuals.

She usually gets the Double Chicken, or Shrimp with Katsu Chicken Combo (they can sub it for you!). She always gets Katsu sauce, as it is her absolute favorite, although she has tried both curry and gravy. And of course, Strawberry Guava Aloha Maid. She gets all mac salad for her sides, because she hates rice.

When I was vegetarian, I got the Tofu Katsu, which is delicious regardless if you’re vegetarian or not! They have a special Katsu sauce for the tofu, which is garlic-y and super savory. I like it a little more than the normal Katsu sauce. Other than that, I will switch between the Chicken Katsu with Gravy Sauce or the Curry Chicken Katsu, and then I’ll add a side of Spam on the side. The curry sauce is absolutely delicious, and Stephon is a huge fan of it as well! I usually get a side of Sriracha too, to vary it up.

The food is always hot, always fresh, and of course, always delicious. It’s weird how a random comment made by Ashley’s coworker led us to this restaurant that had been under our noses that whole time! We’ve gone there so many times, and it’s definitely one of our regular places (the super nice girl working the counter even knows our names! One time Ashley went without me and she asked her where I was!). We’ve had so many awesome memories there, sitting and talking about whatever was going on in our lives, and it’s definitely a place to check out when it comes to Chicago restaurants.

(I’ve made a point to try and drag all of my visiting friends. If you visit me, I will take you to Aloha Eats).

Ashley and I recently took Jojo, and she’s obsessed too!

It’s a unique kind of restaurant, not just because of the friendliness and the welcoming vibe, but definitely also because of the cuisine. It’s nice that I can get Aloha Maid, Portuguese sausage, and everything else they serve on the mainland, and literally get my Aloha Eats.

5 thoughts on “Our Highkey Obsession with Aloha Eats”